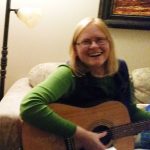 This is a round for up to 4 parts. Or sing it straight.

In the recording below, Pamela had run out of time at the end of a workshop and didn’t have time to teach it as a round, so sang it straight through. It must have been during the daytime, as she substituted “closing time” for “evening time”.

Technical note: If you’re singing it as a round, I would suggest singing the second measure of the first line as written, with a D on the word “is”, rather than how she sings it in the recording, dropping to the B. Otherwise, you’ll be missing the fifth in the chord of G major.

(Side note: The photo shows Pam’s delight as a roomful of family and friends had just finished stumbling through Silent Night in German, just for fun, Christmas 2015.)